STILLWATER, Okla. — An author is aiming not only to educate and entertain youth, but also to help the plight of mustangs.

Bale-Brown said the idea came about when her daughter attended a 2009 football game between Oklahoma State University and the University of Colorado. The halftime of that game featured a presentation from Saving America’s Mustangs, a foundation of Madeleine Pickens, wife of oil tycoon and philanthropist T. Boone Pickens.

Bale-Brown’s daughter told her about the show, prompting her to search for video of the event.

“I watched it and then I started seeing the images around it and it was awful, what was happening to the mustangs,” said Bale-Brown. “I get choked up now.”

She decided she wanted to help the cause. She wrote up a draft of the book and sent it to the foundation. She asked, should her publisher agree, if she could give the money from sales to Saving America’s Mustangs. She said the foundation agreed and gave her permission to use Pickens’ name and likeness in the book. Her publisher also agreed.

According to Bale-Brown’s website, in the book “the children set off on an exciting adventure into the Wild West with Miss Madeleine, who is their guide through the live mustang museum.”

The book is available only at tatepublishing.com until Tuesday. 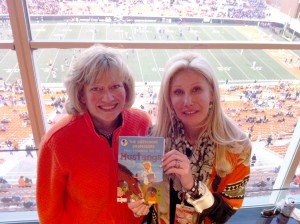 For more information on Bale-Brown and the Preschool Professors books, visit www.preschoolprofessors.com.