As the wife of a billionaire and a wealthy woman in her own right, Madeleine Pickens is accustomed to traveling in limos and private jets. But this afternoon, she is bumping along in a rusty pick-up truck. The truck halts in the middle of a sagebrush valley. Nearby, a broad mountain is shifting in color from ochre to indigo in the fading afternoon light.

Pickens, 64, a petite blonde in a fringed buckskin jacket and matching boots, jumps from the truck and points to a low thundercloud of dust moving across the valley. It’s a galloping herd of mustangs, tan and black and pinto, their manes streaming like water. Soon, the earth is drumming with their hoof beats. “These horses were going to the slaughterhouse,” she says, admiring the racing herd, “and so I brought them to my ranch, where they can run wild.”

Her giant ranch, in northeastern Nevada, is spread across three valleys and two mountain ranges, and Pickens intends to turn it all into a wild horse sanctuary or, as she calls it, a “Mustang Monument.” The first arrivals are 500 horses she bought from a Piute Indian reservation, which, she says, would otherwise have been slaughtered across the border.

The trouble is, many of Nevada’s ranchers look upon these wild horses as vermin, chomping grass that should be meant for their cattle. And these ranchers say they are afraid that Pickens, who is married to energy tycoon T. Boone Pickens, might be leading a stampede of “touchy-feely” millionaire horse-lovers who will start buying up pastures to save the pretty horses. And this, they insist, may run the cattlemen out of business.

Pickens may have money and high connections, but she is confronting powerful forces. The cattle ranchers, according to Chris Heyde, Deputy-Director of the Animal Welfare Institute, an animal rights group in Washington, have an “absolute choke-hold on the state legislature in Nevada.” The ranchers are trying, so far unsuccessfully, to push through a law banning wild horses from having access to water — condemning them to die of thirst. In the U.S. Congress, the cattlemen also have allies among legislators from the 21 farm states and the influential agricultural lobby. (See photos of urban farming around the world.)

Nobody can dictate to ranchers if they want to raise cows or kangaroos on their own land. But in Nevada’s high deserts and extreme weather, most ranches are granted access to vast tracts of federal land for grazing. Pickens’ original spread of 28 sq. mi. gives her access to another 875 sq. mi. of federal grazing land. And it is this public land — controlled by the Bureau of Land Management (BLM) — that has become the battleground between Pickens and the cattlemen.

Pickens envisions Mustang Monument with a museum and lodging for visitors in futuristic teepee villages beside a creek from where they can view the roaming mustangs. Because her horse sanctuary will partly be on federal land, and because she is angling for federal help to keep the refuge running long after she is gone, Pickens needs approval from the BLM. So far, the federal agency has been slow to respond. Animal rights advocate Heyde says that the federal bureaucracy is lassoed to the cattlemen’s interests and has been “trying to tie Ms. Pickens’ applications in knots.” The BLM says it is studying Pickens’ proposals before giving its approval to help her mustang sanctuary.

Caught in the middle is Pickens’ ranch manager, Clay Nannini, a rangy, ex-rodeo cowboy from Wells, Nevada, as adept with his smart phone as his lariat. “Some of the local ranchers could care less, some are in favor, but mostly they’re opposed to what Ms. Pickens is trying to do,” he adds with a shrug, “People I’ve been involved with all my life are giving me the bird and walking away.”

Back in the sagebrush, Pickens grabs an armful of fresh-cut hay and walks boldly towards a wild stallion, black with a splash of white between its wary eyes. The stallion was gelded a few days before and is understandably skittish, retreating from her fearless advance. “Riding isn’t a big part of my life,” says Pickens, who was born in Iraq to a British father and Lebanese mother. “I used to watch [the TV horse opera] Bonanza, and when I came to America, I saw that the things I loved about it — like the mustangs — were being destroyed.” Pickens always had a soft spot for animals. After Hurricane Katrina in 2005, she and her husband T. Boone arranged six airlifts for 800 stranded dogs and cats. Pickens says this gave her a direct, emotional satisfaction she never got by just writing checks to charity. Next, an animal activist drew her attention to the plight of wild mustangs. (The End of the Line.)

Brought to North America by the Spanish conquistadors in the 16th century, horses thrived in the boundless, grassy plains of the West. Estimates in the early 1900s put the number of wild horses at over 2 million, but by the 1960s, the herds were on their way to extinction, with only 17,000 mustangs left alive. Herds were being rounded-up and butchered. Domestic horses were not spared slaughter: even tottering old thoroughbreds ended up being sold for horseflesh. Today, the BLM reckons there are over 33,000 horses in the wild, far too many, the agency insists.

This struck a chord with Pickens. With her first husband, the late Gulfstream Aerospace Founder, Allen Paulson, she had bred racehorses. “The Japanese actually made a big deal of eating a Kentucky Derby winner named ‘Ferdinand'” says Pickens, who is a dainty vegetarian. “I was horrified.”

Her Bonanza-inspired spiritual quest to save America’s mustangs belies the fact that Pickens is an astute operator. As her husband T. Boone tells TIME: “When Madeleine sets her sights on something, you best get on board, or get out of the way. She makes things happen. I’m amazed by her passion for horses and preserving this critical piece of America’s heritage.”

A formidable duo, the billionaire couple lobbied Congress successfully in 2007 to ban horse slaughter in the U.S. Consequently, many horses are trucked over the border to Canada and Mexico to be butchered and exported to Japan and Europe, where horsemeat is a prized delicacy. In 2008, the BLM announced that it was considering a massive cull of wild horses. The BLM backed off on this, due to public outrage, but it spurred Pickens into action. In 2011, she closed on two adjacent Nevada ranches for her eco-sanctuary, a place where mustangs could roam free and the public could watch these equine icons of the wild west.

So far, the BLM keeps over 41,700 horses in captivity. Over 15,000 are crammed into corrals, “butt to butt”, says Pickens, while the others are kept in long-term pastures, costing the taxpayers around $70 million a year to feed and care for the animals. “Forget about sentiment, you’re talking about $70 million for a government that’s busted,” she argues. “I can look after mustangs more cheaply and humanely.” (Farm Camp: Would You Pay $460 to Shovel Crap?)

Prodded by the cattlemen, the BLM also rounds up thousands of wild horses every year, using helicopters that swoop low over the stampeding herds and drive them until they are so exhausted they can be easily caught. The BLM says that over 33,000 mustangs and wild burros are still roaming free, more than can be sustained by the available pasture, but animal rights activists dispute this. Says Heyde, “There are 8 million cattle and sheep on government land and yet a few horses get blamed for everything.”

Pickens knows that even with her fortune, she can’t save all of America’s mustangs. With pasture sparse, even her massive ranch can only handle 1,800 mustangs. But she insists that her eco-sanctuary will serve as a model for other reserves where horses can run free and the size of the herd can be managed. With no predators and ample food, a herd of mustangs can double in size in five years, a prospect that scares cattle ranchers. Steve Boyce, a former President of the Nevada Cattleman’s Association, says, “We’re made out to be the bad guys here. But there’s a limited amount of forage out there. In the winter, it’s all froze out. We’re worried that if the horses aren’t gathered, they’ll eat the pasture for our cattle.”

A helicopter buzzes down to chauffeur Pickens on an aerial tour of her property. She is joined by Tommy, her pet dachshund, who is so accustomed to his mistress’s jet-set lifestyle that, as soon as the helicopter roars skyward, he falls asleep in her lap. The helicopter banks over juniper-clad mountains, up into the high meadows. And there below is a herd of mustangs, racing along the mountain ridge, wild and free-spirited. “To me, these mustangs are emblematic of America’s freedom,” Pickens says later, “And they’re ending up on dinner plates in Japan and Europe.” 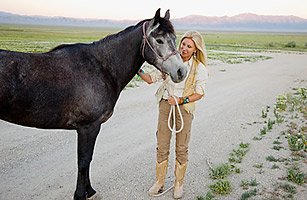 Tim McGirk is a former TIME Bureau Chief and currently a fellow at the Investigative Reporting Program at the University of California, Berkeley, Graduate School of Journalism.