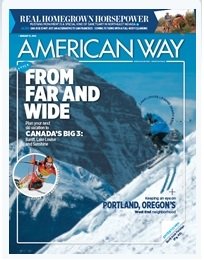 A cloud of dust billows in the distance. “Look! It’s the horses!” cries Madeleine Pickens, delighted at the sight of 28 of her rescued mustangs galloping across our path, manes blowing in the breeze. Once doomed for slaughter, these rescues enjoy a transformed life of health and freedom in the 900 square miles that is the Mustang Monument Wild Horse Eco-Resort and Preserve.

A scenic three-hour drive west from Salt Lake City, Mustang Monument is off Highway 93 in northeast Nevada. (It took me four hours, because I stopped at the Great Salt Lake and the Bonneville Salt Flats.) The preserve, which opens in summer 2014, is nestled between the East Humboldt Range and Spruce Mountain, the land stretching out to the Pequop Mountains and Goshute Valley. It feels like something out of the past.

“Let’s take a drive in the Tomcar,” Pickens says as she jumps out of our truck and into the small off-road vehicle sitting in the shade of Spruce Mountain. We weren’t really on a road to begin with — we are deep in the preserve on a dusty trail — but we are most definitely ­“off-road” in the Tomcar. With Pickens behind the wheel, we ramble across rugged hillsides. The smell of spruce fills the air as the Tomcar drives easily over the woody shrubs.

I hope to see the native mustangs of the West, which have been known to share the land with those horses that Pickens has rescued from captivity. In the Wild and Free Roaming Horses and Burro Act of 1971, Congress called the free-roaming horses “living symbols of the historic and pioneer spirit of the West” and declared that they “shall be protected from capture, branding, harassment or death.” ­Madeleine Pickens, too, wants to save mustangs from slaughter — both free-roaming ones and those she’s rescued — so she bought and transformed this preserve of lush grassland, scrubby hillsides and mountains. It now serves as a home for 600 mustangs she’s rescued since 2011. The 28 we saw were followed minutes later by 15 more.

“Where are the others?” I ask.

A businesswoman, philanthropist and animal-welfare activist, Pickens found success in thoroughbred breeding and racing while her passion grew for the preservation and retirement of horses. She fought to close the last slaughterhouse in the U.S., leading to the American Horse Slaughter Prevention Act of 2011. In 2008, when the U.S. government considered euthanizing or selling 30,000 wild mustangs to slaughterhouses overseas, Pickens started Saving America’s Mustangs, the organization that raised the funding for Mustang Monument.

For her, it’s a calling.

I grew up in New Orleans, where cowboy boots and hats were costumes for Mardi Gras and Halloween. I remember the white fringe skirt and boots I got for Christmas when I was 8. Wanting to be a cowgirl, I would practice lassoing various objects. (An animal lover and rescuer myself, I never tried to lasso the dog.)

Mustang Monument is how I imagined the West to be: big and wide with mountains and grassland. It’s not like Dallas/Fort Worth, where I currently live. It’s also not like Phoenix; Denver; Santa Fe, N.M.; or any Western town I’ve visited. In fact, if Fort Worth’s motto is “where the West begins,” northeast Nevada’s should be “you’re smack dab in the middle.” Here, I get to wear my turquoise cowboy boots and straw cowboy hat for function; I get to be a cowgirl. Pickens knows the spirit this place elicits in its guests. “I didn’t start this for tourism,” she says, “but why not share it?”

Indeed, Mustang Monument will be open to the public June through September. Beyond vacationing, one-day trips are available too. Your adventure is limited only by your mind’s imagination. And keeping in step with the resort’s surroundings, guests sleep in tepees perched in scenic vistas at the foothills of the Goshute Mountains, much like Native Americans did in the 1800s. Except these are luxury tepees, each painted in a different motif and outfitted with king-size beds, lush linens, hardwood floors with wool rugs, dressers and more beautiful antiques and Western decor from a variety of high-end vendors and retailers. Each tepee has its own adjacent bathroom with a toilet and a shower. In and around your accommodations, you can relax while watching wildlife, play horseshoes or bocce ball, practice archery or even swing in a hammock.

There are also organized activities, like wagon rides and cooking lessons. And though most people — myself included — might imagine beans heated over a fire and coffee you have to chew when thinking of cuisine of the Wild West, Mustang Monument takes cowboy chow to a whole new level. The five-star menu includes delicacies like smoked rainbow trout, black pepper duck confit and seared scallops. Guests eat in the dining-room tepee, which is charmingly decorated with sunflowers, American flags and tabletop lanterns that give the canvas walls a soft glow. Following dinner, guests can relax in the game-room tepee, which has card tables and a bar.

Of course, 19th-century settlers didn’t have it this good, and the resort’s historians will be all too happy to educate you on what life was like for those pioneers. Landscape architects and environmental scientists are also on hand to teach you about your surroundings, while astronomers will help you navigate the night sky. By the end of your stay, you’d be well versed enough to lead a cattle drive across the desert on your own. That is, if your digs weren’t so temptingly comfortable.

Dust devils pirouette harmlessly in the distance, dissipating as rapidly as they form. Pickens tells me about other rescue animals at the preserve, like Tommy, her beloved dachshund, and Nero, a Belgian Malinois that was used in combat for several years. Nero, who has been here a few months, suffers from PTSD and jumps at the slightest noise. He is slowly recovering.

I share pictures of my own rescues: three Shelties, a schnauzer and a cat. Pickens is more than merely courteous as I speak — she’s genuinely interested. After all, she paid for and arranged the rescue of more than 800 dogs and cats from New Orleans after Hurricane Katrina.

Later, while I’m resting in my room, there’s a commotion in the kitchen. Pickens’ staff found a Sheltie stumbling into ­traffic on a remote stretch of highway. Matted, tired, hot and nearly run over, he’s now safe — ­rescued like the mustangs.

NOW YOU KNOW: Madeleine Pickens was named a “Person of the Week” by ABC News in 2008 for her efforts to develop a sanctuary for horses.

On my last morning at Mustang Monument, we indulge in a hearty breakfast and delicious coffee (no chewing required). Our new furry friend greets Pickens with a ­special Sheltie dance, to which Pickens says, “Hello, Sunshine!” That becomes his name; Sunny for short.

Sunny hangs out with Nero and Tommy while we humans visit a special group of older horses living their last years in luxury. Some are caisson horses whose duty it was to transport service members to their final resting place. Incomprehensibly discarded for slaughter, the horses have been given by Pickens the dignity and respect they deserve. These horses happily saunter up for ear scratches while pronghorn watch from a safe distance.

When the end of my time here comes (far too soon), I say my goodbyes. Pickens has already found a home for Sunny. Sad as I am not to take him home with me, I know Pickens has made sure he has a wonderful life ahead of him. She’s good at that.

To learn more about Madeleine
Pickens and her horses, visit
www.mustangmonument.com