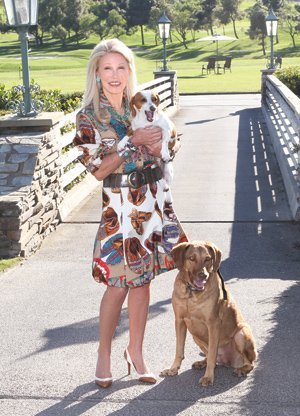 Madeleine Pickens has infectious enthusiasm. Add to that a creative streak. Pickens works to match the causes she is passionate about with the structure to make them work out financially. “I think out of the box,” she said. She splits her time between Del Mar and the northeast part of Nevada, where she holds half a million acres of ranchland and is working on a project with multiple goals. First, her Nevada project would provide sanctuary for wild horses. But it would also be an opportunity to let guests take a break and enjoy nature. Pickens said her “eco resort” concept could one day be a destination as great as Yellowstone National Park or Disneyland.

Her San Diego enterprise is more established. Pickens is sole owner of the Del Mar Country Club, a few miles up the San Dieguito River from the Del Mar Racetrack.

She and then-husband Allen Paulson, the founder of Gulfstream Aerospace, bought the property out of bankruptcy in 1993, and made it profitable. The location was convenient because the couple enjoyed racehorses. Their horses included the thoroughbred great Cigar. Paulson died in 2000 and by 2005 Madeleine Paulson was going by the name of Madeleine Pickens, with her marriage to oilman T. Boone Pickens. The story of the club’s business, however, took an important turn two years earlier. Pickens recalled that by 2003 the Del Mar Country Club was administered by a trust and was losing $1.8 million per year. After she took full ownership, she turned it around within a year, she said, cutting expenses, increasing revenue and upping the quality of member services. It’s a record she said she is proud of. The club has hosted events such as the American Airlines Celebrity Golf & Tennis Tournament, the United States Golf Association Women’s Senior Amateur Qualifying and the Charley Hoffman Foundation San Diego Pro-Am. Joseph Lee designed the golf course, which measures 7,226 yards.

Par is 72. Its Professional Golfers’ Association of America rating, from the back tees, is 75.4 and the slope is 142. The Del Mar Country Club is private. However, management has opened the clubhouse for a limited number of corporate and social events for nonmembers. Without boards or other people holding shares in the club, administration gets pretty simple. “It’s what I call a benevolent dictatorship,” Pickens said, with a grin. Pickens’ twin sister, Christine Penrod, serves as the club’s general manager.

The club is out of the ordinary in several ways.

Under Pickens, the club is dog friendly. Dogs are allowed on the golf course as long as they are well-behaved.

Pickens grew up with golf — and with dogs on the course. She recalled a time at the storied St. Andrew’s course in Scotland, when play was halted because a dog was crossing the course. “I loved it!” she said.

What’s more, there are no tee times at the Del Mar Country Club, and no requirement to play as a foursome. The club accommodates groups of various sizes.

Cellphones? They’re OK at the club.

Like other country clubs, Del Mar was affected by the Great Recession. “We lost members in the beginning,” Pickens said. The club reports that membership is now on the increase.

Even with the bad economy, Pickens has kept the golf course up to standard while competitors’ courses have languished.

Pickens continues to invest in other aspects of the club. She is putting in a spa and is developing a fitness studio; she sees a future offering yoga and dance, as well as massages and facials.

Pickens said country clubs could do better at accommodating their women members. And she said she prefers to cultivate a “vacation” atmosphere rather than an uptight, stereotypical country club atmosphere.

Pickens’ father was British, and after World War II he went into the oil business. She was born in Iraq, and learned the game of golf at a course her father designed in Kirkuk.

Today she admits a love-hate relationship with golf. She said a person can have an excellent game one day and a frustrating game the next.

Pickens noted that a game of golf can tell you a lot about a person.

“I think if you want to do business with a person, play golf with them first,” she said.